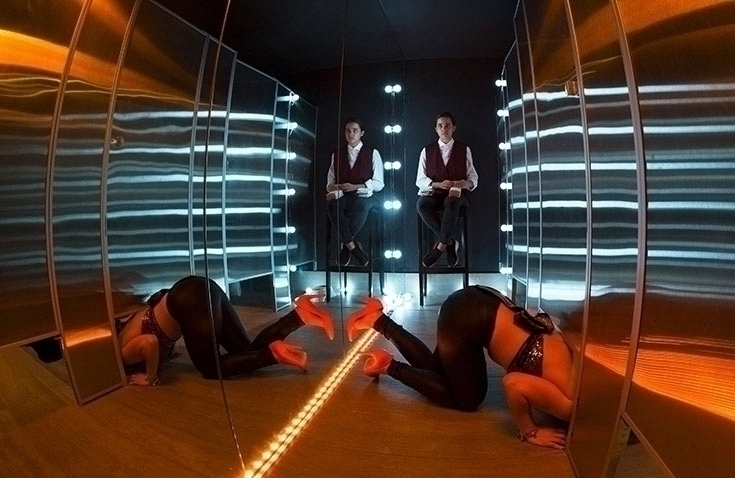 a film by MARTA HERNAIZ PIDAL

If you are rejected from PISO 14, the most glam and trendy club in México City you are basically no one. So, LENA (18), and her group of upper-class catholic friends are willing to do anything to be admitted and party like there is no tomorrow.  Once inside, Lena tries to do wild and crazy things to have fun but her best friend ANA PAU (17), encourages the group of friends to stay with her boyfriend SANTI (20) and his boring group of friends.

Inside the woman’s bathroom a prepotent customer insults the young cleaning girl in charge, and Lena comes to her defense, turning the fight into her own. Unable to reconnect with her friends’ mood, Lena refuses to go back home with them and stays the rest of the night at the club, alone and drunk.

When Lena sees Santi came back after dropping Ana Pau home, and is flirting (or maybe harassing) with a girl who looks somewhat familiar, she storms towards his table as the mysterious girl nervously runs off towards the women’s toilet, where she puts on her uniform and we discover she is in fact ESTELA (19), the cleaning girl, who sneaks out of her house every weekend to go to Piso 14 to earn tips.

Estela works behind her widowed father’s back because they belong to the Jehovah’s Witness organization, whose strict mandates would never allow her to be in such a “worldly” place. Estela has been doubting their beliefs ever since her cousin KEVIN (25), was expelled from the congregation, because of his homosexuality. The congregation forced Estela to shun him and forbid her to contact him at all: the first rule Estela ever dared to break!

Despite the fear of facing her cousin’s fate and disappointing her father, Estela lies to him in order to keep going to the women’s bathroom at Piso 14, where having a job meant to be invisible allows her to witness the most intimate moments of girls her own age and therefore have a glimpse of a very different lifestyle than her own, the flashy, hedonistic and highly hypocritical world of Mexican elites.

Wandering between these two universes: pretending to be a committed believer and responsible daughter during the day and coping with the vicissitudes of the night by taking care of drunk girls, like Lena, and hiding her religious background to her colleagues, Estela slowly alienates herself as she takes more and more risks by imitating the girls she attends in an urge to belong somewhere.

Meanwhile, Lena feels rejected by her friends after constantly pointing out their actions, questioning their arrogance and hypocrisy in her vague attempt to escape reality and her loneliness, which slowly makes her strong personality fade away.

Sparks of light in the dark, popular songs booming, tequila shots, gossip and the constant toilet flush as an announcement of the end of a world