Iran 89′ a film by MASSOUD BAKHSHI   In Iran today: Maryam (22) accidentally kills her husband Nasser (65) and is sentenced to death. The only person who can save her is Mona, Nasser’s daughter. All Mona has to do is appear on a popular live TV show and forgive Maryam. But forgiveness proves difficult when they[…]

UKRAINE  • 120′ DONBASS by Sergei Loznitsa When we call “peace” the war, when the propaganda is presented as the truth, when we call “love” the hatred, it is there that the life begins to look like the death. Donbass survives. Manuel practises hell. There is a hackneyed phrase: history repeats itself – the first time[…]

ITALY – 90′ a film by Danilo Caputo Nica, 21, drops out of her university course in agronomics and returns home to Apulia in southern Italy after three years away. She finds her father deep in debt, a polluted, devastated region, and olive trees destroyed by a parasite. Everyone seems to have given up in[…] 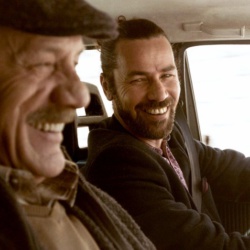 PALESTINE/FRANCE  •  90′ a film by ANNEMARIE JACIR Abu Shadi is a divorced father and a school teacher in is mid-60s living in Nazareth. After is daughter’s wedding in one month he will be living alone. Shadi, is architect son, arrives from Rome after years abroad to help is fatherin hand delivering the wedding invitations to[…]

CHILE   •  100′ a film by PATRICIO GUZMAN « I recall September 11, 1973, that dark day when America instigated a coup d’état to bring down the pacifist and democratic revolution that was taking place in a faraway country, Chile, my homeland. Salvador Allende, the President of the Republic, that “son of a bitch‚” as Richard Nixon[…]

CAMBODIA  •  115′ a film by RITHY PANH August 1992. Savannah, 28 years old, finds himself back in Phnom Penh after four years on Cambodia’s northern front, fighting the Khmer Rouge. Like the rest of his generation, he’s known only war since infancy, camps, hunger and massacres. All he’s got left now is his uncle, Sôn,[…]

FRANCE  •  90′ a film by PENGAU NENGO “Papa”, one of the chiefs of a tribe in the highlands, is taxi driver of a ” Tinpis”, a collective bush-taxi (a sardine tin in Pidgin). Saved from an ac cident by Naaki, a young man from the city, he offers him his daughter in thanks. Joanna and[…]

SPAIN  •  108′ a film by MARC RECHA While visiting his mother, Pau takes a phone call: his brother long disappeared, has committed suicide. Pau and his mother, who is unaware of what exactly happened, set out for the small Pyrenean village where Alex had lived before he took his own life. A journey down their[…]

SPAIN/FRANCE  • 126′ a film by MARC RECHA The story could be told from several points of view. There’s Perroquet, a pesky parrot who witnessed the premature demise of his owner, Madame Catherine, due to her excessive lifestyle. The bird was also around to see Eric, the mechanic, bury her on the sly. The trains that[…]